In October last year I finished my Honours course. My hard work was sent off to the printer, and put between covers before being sent off for marking. My partner and I had spent hours on a cover design which I felt did justice to the texture of the work. A month or two later, I received some really energising feedback, a good mark, and told myself that I had done enough. I was allowed to finally take a break. 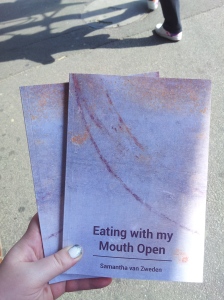 I put the ‘final’ product of Honours away in a box and didn’t look at it for four months. I recently picked it up again, and read the creative component. It had been my intention to take a break, put it away, and come back ‘with fresh eyes’. This is what all my favourite writers advise – write it, put it away, and come back later. I might then be able to pick out the flaws more easily, making the process of rewriting and expansion much easier. But on rereading I noticed that I had told a whole story. The work has a beginning, middle and end – the small (10,000 word) project had done its job.

Applying a narrative arc to anything from life complicates it at the same time as simplifying. Providing a clean story structure to anything ‘true’ (no matter how experimental or indirect the trajectory of the story), it changes the way we think about our life’s events. I heard the other day that each time we remember something, we’re actually just recalling the last time we remembered it. My work remembers, remembers, remembers.

And here’s the grind. The stories I told (and am still telling) have been told already – and I have told them in a final way. I struggle now to undo it. In recent months, every time I sat down and try and ‘expand’ that project, to fill in gaps and bulk it out, I couldn’t. I opened the document, put something in, took the thing out, and closed it again. Having seen what I have to say set between covers, with a title and publication date – I wanted desperately to take it all back, and start again. The end product of Honours feels too inevitable – that story has been done, and I can’t insert anything more into it.

I’ve come to realise the way in is about recontextualising. What I have is a complete first draft, but not of this project. While I thought the personal story I’d written needed to be more, I’m now wondering whether, actually, perhaps it’s quite enough. Perhaps what I need to do is take that story with me as a starting point for another project, one which informs my looking at these issues (food, memory, family) in a more outward way. And perhaps the work I’m doing needs to be done in the opposite direction – rather than opening a soft copy of ‘my book’ and trying to shoehorn new bits in, I’ve been working from a blank document. Saying it all over again, and borrowing from what I’ve done when needed. I hope that the work I’ve done will be giving and generative, and that both pieces will work together, with bits from that personal storyline interweaving with the larger, more ruminative thinking throughout. I hope that eventually, these two strands will become one, and the whole thing will make some sense.

But you never really know, do you. You just sit at the desk each day and try to put something, anything, down.