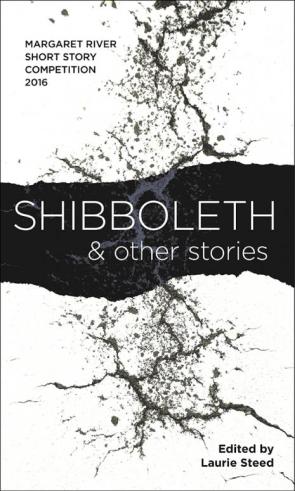 In Jo Riccioni’s short story, ‘Shibboleth’, ex-lovers visit the Tate Modern to see Doris Salcedo’s installation, ‘Shibboleth’. The story’s protagonist feels ‘a primal shock, the life-sized rupture of it in all that civilised space’. The story runs for a short 12 pages, but gestures far more widely than those confines without feeling too ambitious. A shared past is cobbled together from snippets. The dialogue glows with the warmth and idiosyncrasy of talk between familiar people. This is the story that won the 2016 Margaret River Short Story Competition, and the story which provides the title for a new book from Margaret River Press, compiling outstanding entries from that competition.

I know little-to-nothing about what happens in the writing world of Western Australia, and I’m both apologetic for and embarrassed by this. I suspect it’s unconscious urban south-eastern literary snobbery at work. But WA accounts for such a large portion of our country, it’s silly not to make a priority of knowing what’s happening there – such as the good work done at Margaret River Press. This collection features writers from Australia and New Zealand, but also (importantly) new and exciting voices from WA, including the winner of the Southwest Prize, awarded to a writer from south western WA (this year, Phil Sparrow’s story ‘Theo’).

The vast majority of writers in this collection are female. The experience level of the writers included varies greatly, ranging from a first publication, through to the winner of this year’s VPLA for an unpublished manuscript, and others with major awards and big-name publications under their belts. Casting an eye over the author bios at the back of the book, it looks like this collection could, in years to come, be a bit of an early who’s-who in the world of Australian fiction.

Salcedo’s art work, alluded to in Shibboleth’s cover art, is a huge installation. It’s a fissure in the gallery floor, the kind of damage done by a massive earthquake, only this is man-made. It’s a stunning image that stands at the centre of the award-winning story, but it also provides a wonderful unifying motif for all the stories in the collection.

Again and again, these stories riff on that gap – for better or worse. Maybe it pulls people apart. Maybe it’s something to be overcome. The crack’s still there though. These stories acknowledge the existence of the gaps, and all our attempts and failures to bridge them. In ‘Shibboleth’ it’s what comes between the central characters, and its protagonist scoffs at the tactless metaphor. Throughout the collection, these chasms also exist between carers and patients (’It Used to be a Boyd’, ‘Flight’, ‘Theo’), and between who we are and who we’d rather be (’Teacher’ and ‘Fork in the Path’). It’s the space between the limits of human behaviour – the awful, as in ‘Fork in the Path’ and ‘Composition’, and the redeeming, as in ‘Teacher’ and ‘Flight’. Between the familiar and the strange; exploring the rub of strange places and new experiences, or the moments where the the repetition of the same-old reaches breaking point. Sometimes it’s literal, where physical structures separate us, like animal enclosures (‘Thirsty’) and wards (‘Theo’). Or perhaps it’s the space either side of death (‘Flight’ and ‘A House’) or grief (’Before they had Teeth’, ‘The Sea also Waits’). Again and again, the stories in Shibboleth act as meditations on what brings us together and what sets us apart. It looks at the tears – large and small – that appear in the fabric of the things that make us human. The faults and cracks. And the tiny, skipped rhythms of everyday life.

The Southwest Prize winning entry, ‘Theo’ (Phil Sparrow) is about the ease with which we can slip away from being able to care for ourselves. It talks of those complacent to this reality as ‘They who thought they were safe’. Shibboleth, as a whole, cumulates as a study in the faults in that safety. At any moment things could change; these stories are pivotal moments.

The collection is at its best when the stories act as a catalogue of things that the form does so well: tiny moments of unease, glittering language, and stunning central images (such as Shibboleth, or the baby trees at Tana Toraja).

I didn’t love all the stories in this collection – with 24 stories in there, that was always unlikely. But the ones that got me really got me. ‘Le Farfalle’ and ‘Before they had Teeth’ both left me wanting more. My favourite story, ‘It Used to be a Boyd’ is about a mock wedding that happens every week in a nursing home, because ‘everyone loves a wedding’. The aged care worker at its centre, and the resident with whom she connects, felt very real.

There’s a paradox in really good short stories where they manage to feel bigger than they actually are, for their gesturing beyond the bounds of their page length. At their longest, the stories in Shibboleth run for 12 pages. At their shortest, just four. They’re very ‘just-one-more’ish, and fit easily into commutes or before-bed reads.

In just a few sittings, Shibboleth took me around the world, into lives I’d never heard of. It introduced me to characters both sympathetic and not, and to writers I can’t wait to hear more from (Magdalena McGuire and Cassie Hamer, I’m looking at you!). It pivoted gracefully around the chasm introduced in Jo Riccioni’s title story, and made me consider the turning points and breaks in my own life.

Entries for next year’s Margaret River Short Story Competition are open, with Ellen van Neerven editing. If this year’s shortlist is anything to go by, the competition will be fierce.