Review: Letter to a Future Lover, by Ander Monson 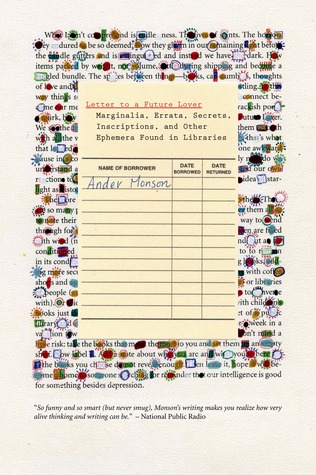 Books take up more space in my apartment than my body does. My books pack three large shelves in two rooms, and tower over my desk. A linear reading of the books I own might tell you something about my life.

Idea (not my own): A new shelving system where books are organised by when I acquired them, not genre or alphabetical order – Blyton, Alcott, Montgomery, Astrid Lindgren, John Marsden, Brigid Lowry…

Idea: Shelving according to a book’s importance in my life – starting in much the same way – with Blyton, Alcott, and Montgomery – and later moving on to Josephine Rowe, Shane Koyczan, Nick Flynn, Bronte (C), David Shields, Sandy Jeffs, Maggie Nelson…

While my books take up more space in my apartment than my actual body does, the books kind of are my body. More important than the placement of my books is what I leave in them – proof of my existence remains in the books that I have read in a similar way that scars on my body mark time, growth and narrative. Books are proxy bodies – and inherited books are other people’s bodies. When I pick up a book from the Little Library at Melbourne Central, half of what I’m hoping for is evidence of the existence of another. An echo of a mind, a body, a being moved by a book’s contents. I used to go to book sales held in an old garage in North Melbourne. The books sold were second-hand, and all had things squirrelled away inside them. I think they were forgotten or discarded on transport: books as temporary friends and lovers. Found inside these books I bought: The instruction tag off an electric blanket. Flight tickets. A birthday card. Less extraordinary: a date of purchase scrawled on the title page. Name, address. Underlined passages, pencilled stars, torn or folded pages.

Discovering someone else’s left-behind evidence in a book is intimate, despite what otherwise looks like distance.

This is what made Ander Monson’s Letter to a Future Lover such a delight to read. The book’s subtitle is Marginalia, Errata, Secrets, Inscriptions, and Other Ephemera Found in Libraries, which provides almost as much information as you need in order to frame your reading of the book (though, perhaps not). In it, Monson catalogues his experiences of travelling through all manner of places that might be considered ‘libraries’ – the Biosphere library, a prison library, unmarked and unadvertised university libraries, personal collections, his wife’s notebook, and others – and inspects a broad range of things left behind by previous readers. The physicality of books and their homes is the focus of this work, and it questions the ways we interact with these ideas as readers.

I brought previous readings of Monson’s other work to this one – his usual preoccupations with the digital, the weirdness of American consumption, decline and obsession all show up again in this one. What seems unique to this, though, is the level of personal detail which Monson is willing to divulge. He faces his mother’s death, the decline of his home town and his relationship with is child head-on, if necessarily briefly. Seemingly giving himself over to the intimacy which this book-as-body relationship entails, we’re given glimpses into some much heftier emotional content than in his previous work – at least, that which I’m familiar with. At the same time, there’s a great deal of restraint here. Each essay, accompanied by a piece of the detritus mentioned in the book’s subtitle (the visual elements of this text are exciting, delightful), only runs a page or two in length, and winds associatively rather than exhaustively. Like any such lyric work, we accumulate a sense of imperfect understanding by the end of the book, rather than an argument won. Even the most personally revealing emotional content in Letter to a Future Lover amounts only to a glimpse – as, I suppose, does the marginalia encountered in any book. What the book provides, then, is marginalia to the marginalia. An extra level of remove which somehow says more about the artifacts inspected than if the writer were to address each article straightly.

Like Monson and the defacers, lovers, and lost voices he collects here, I have no problem marking my books (NB: My books. My own. Never anyone else’s). I dog-ear my books. I leave pencil-marks in my books. I leave crumbs between pages, and pages ruffle with moisture where I’ve spilled water or coffee. I don’t despair at these markings in the same way that I don’t despair at a new freckle after yet another bout of sunburn has peeled. Deterioration is proof of life.

How much do I remember of books I’ve underlined and annotated? High school texts left an imprint for just this reason. Also, possibly, because I was young and impressionable, but I think the marking helped. The marking echoed and burrowed homes in my body. Left elbow: here lives Gatsby’s green light. Right elbow: Nora’s macaroons. My body parts move, hinged on much-loved and internalised imagery. Underlining slows reading down, for the brief period of pencil-to-page.

And so, bolstered by the beauty, poetry and kinship of Monson’s book, I’ll continue to meet texts I enjoy head-on. In like terms, I’ll keep talking back to the analogue, inserting myself where I feel the need. I’ll keep treating books as the bodies they are.