Jumble is a collection of food-themed personal essays from first, second and third-generation migrants, edited by the team at rip publishing – Zoya Patel, Farz Edraki and Yasmin Masri. It includes stories from Rafael Kabo, Adam Ridwan and Yen Eriksen. It’s beautifully produced, and has a foreword by Benjamin Law.

It also includes the story, reproduced below, from me. All stories in this collection are accompanied by a recipe for their dish. The recipe that goes with my story is simple: potato chips. Jimmy’s satay sauce. Whole-egg mayo. Job done. 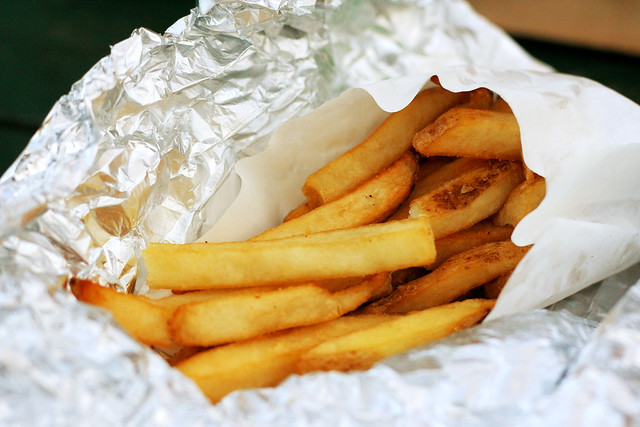 I can’t even pronounce it correctly. Every time I try, the vowels slip around in my mouth and come out mangled. The memory of patatje flip lives in the failure of my speech, and in the taste I have for something that isn’t actually a real dish.

Patatje flip is potato fries with thick mayonnaise and a peanut satay sauce. Nightly, Dad would come up with new variations on sauce combinations, which never quite resulted in what he was searching for. His sauce-mixing experiments fascinated and entertained me, and I felt a kind of kinship in our search for The Sauce.

For 26 years I have watched Dad attempt to recreate those sauces at the dinner table. A Dutch table features condiments proudly in the middle, and whatever else might appear, mayonnaise is never missed. Not the sweet, runny commercial mayonnaise Australians favour, but thick, whole-egg mayo. The kind that peaks on the plate and dries clear if left on un-rinsed dishes overnight.

Jimmy Paste is an Asian, fish-based peanut satay sauce. The closest Dad got to patatje flip was to combine Jimmy paste with whole-egg mayonnaise. The two sauces would sit side-by-side, with a little ooze section in the middle where the two touched. The mixing was done by chip, picking up a little of both sauces from the swirl of satay and mayo.

Lord of the Fries was a revelation. Their fries are fries, and nothing particularly special, but their sauce selections are the stuff of magic. I took Dad and introduced him to the Asian fries, which combine Belgian mayo with satay sauce. This is it, by another name! I thought.

Dad chewed and tilted his head from side to side for a while.

“Are they it?” I asked with a smile in my voice, because I was so sure that I’d given my father a connection with his homeland – so sure that I’d found the end-point to all the sauce-mixing and searching.

I realise now that even if I did find the right sauces for patatje flip, this isn’t what Dad’s looking for.

I can point to all kinds of Dutch food as evidence of my heritage. The only member of my family born in Australia, and the only one who’s never been to Holland, I have still inherited Dad’s foreign palate.

Mayonnaise belongs on: steak, chicken, fish… all protein, really. And chips, steamed vegetables, or salads. And anything that doesn’t have a strong flavour of its own. And some things that do. My brother went through a thing with mint slice biscuits and mayonnaise.

I felt personally affronted and outraged when Gloria Jean’s introduced their “Coffee topper”. That’s not a coffee topper; that’s a stroopwafel.

How novel is apple sauce as a condiment? It’s not. That’s appelmous, which is similar to mayonnaise as a Dutch condiment that’s appropriate on everything.

Dad’s experiments with recreating pataatje flip weren’t the only thing he experimented with. He also bought a heap of large sandwich presses (like, you’d be able to do four sandwiches at a time if you wanted), and created stroopwafels which were much more cinnamon-y than the packet ones, and lacked the distinctive waffle print. At least with stroopwafels I had tasted the real thing, and I could judge that these were not the same.

I haven’t tasted the original versions of much of the Dutch food that I know and love. My palate is full of weird impostors; even if you gave me real patatje flip, I probably wouldn’t enjoy it. I’d rather Jimmy and mayo.

Then there’s the food that I don’t know the origin of. There are some confirmed strange foods – salty, fatty herring, chocolate sprinkles that are eaten on toast for breakfast, liquorice that tastes more like salt than like sugar. But there are also foods that could be blamed on my father’s weird, nation-less palate. Fresh strawberries on sandwiches (must be very, very fresh bread). Leftover rice microwaved with brown sugar and butter to make pudding. Lashings of butter and a thick layer of brown sugar on sandwiches after lunch, like a dessert sandwich.

Are these Dutch foods? Are they foods anywhere?

Chips with Jimmy paste and whole-egg mayo is not patatje flip. But they are my patatje flip, and they are the thing I picture when those words are spoken. They’re not the thing Dad pictures, and Jimmy and mayo are never ‘it’, just an attempt to go back. My father’s failed attempts at recreating the foods that remind him of where he comes from are my memories of home.

With many thanks to the Jumble team for their fantastic work on this publication. You can purchase a copy of Jumble here.

This piece is also part of my Honours work, which is about food and memory, particularly within my family.