The World’s Most Affordable Lit Festival

The program for the Willy Lit Fest has been released, and I’ve scoured and circled and am about to purchase tickets.

“But you’re a student!” you may exclaim, wondering how I can afford such things. 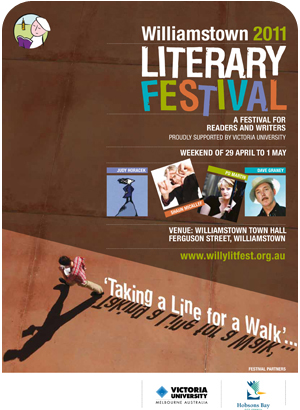 A panel with Steven Amsterdam (who, has anyone else noticed, was in the last Big Issue holding chickens?), Jon Bauer and Jonathan Griffiths, titled “Getting Your First Novel Across The Line”. Sure, I don’t have a first novel, yet. But school’s mentioned its importance to my graduation; it’s come up. They’ve even got me taking a course which hopefully insists on referring to “Your Novel” (capitals and all). So eventually, the advice from this panel will surely come in handy. And Steven Amsterdam makes me happy.

Carmel Bird is one of my favourite short-storyists, and she’s running a workshop on writing memoirs, which gets me excited also. Both time with Carmel and the memoir-writing tips.

And a session with Angela Meyer about blogging. As you may have noticed, this here blog has been receiving some re-vamping lately. I’ve been trying, world, I really have. So let’s hope Angela has some tips which will make me (blogger) and you (, dear reader) happy.

Willy Lit Fest, the world’s most affordable literary festival is happening on the final weekend of 30th April-1st May. For those of you who (like me) didn’t know, Williamstown is only 30 minutes train ride out of the city, so not only is this cheap, but accessible also. Write-ups of above events, of course, to follow.