This was the 2010 Overload Poetry Slam Grand Final – three rounds, eighteen performers, a hell of a lot of shouting, clapping, drum-rolling, laughing, nodding, mind-blowing. There was debate about scores, there was begging for the tech guy to stick around so the event could wrap up. And WHAT a wrap up!

Eighteen performers competed in the first round, six in the second, and four in the third. The third round (originally of three performers) grew to four due to a mis-read of scores, with a 0.1 difference resulting in an extra competitor. 0.1! That’s how close the night was.

The final round of four performers featured Joel McKerrow, Luka Haralampou, Steve Smart and Graham Colin. These men are THE best Melbourne has to offer, and this means we have a hell of a lot to be proud of.

Steve Smart balances on the line between sardonic wit and a raging inferno of intensity. He

understands, in a way that is just so spot-on when it’s appropriate for the wit, and when for the intensity. He jams these things up against each other like tetris blocks, there’s just no gap at all. His self-deprecating humour doesn’t make the audience squirm, and he plays the cynic perfectly. Steve Smart is a brand unto himself, and he knows how to play it. Somehow, he manages to always keep it fresh, and last night was no exception. He placed fourth with a score of 81.29.

If you’ve ever read anything Beat, you’ll recognize Graham Colin instantly. He’s the dapper fellow, one of any of those dapper-writing-fellows from the Beat Generation, and he performs that way too. The way Graham moves, the way Graham performs, it’s all jazz. In the second round, Graham performed a piece that began and was punctuated by scatting, and he scatted incredibly well. He spoke about making love to artists, and I believed every bouncing, scatting, jazzy word. Graham placed third with a score of 81.46.

Joel McKerrow towers over the audience but never appears too big. Never appears forceful, but always urgent. He bounces on the balls of his feet, his arms flying out in all directions to help deliver the words from his mouth, across space, to your eager ears. His words work through him, and his poems have life. Joel placed second, with a total score of 82.11. 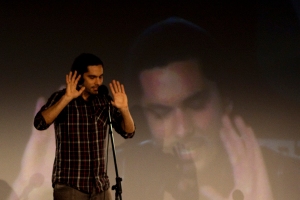 First place winner – Luka Haralampou… Knocked.My.Fucking.Socks.Off. You know a piece is good when the audience starts whooping and clapping midway through the piece in agreement. You know it’s good when people jump to their feet at the end and clap with their hands above their heads. Luka is a slam poet and hip-hop artist. He works the two together, his slam runs along with a true hip-hop bounce, and he stands his ground in his words. Luka’s subject matter is concerned with understanding, with growing. I think that’s something that speaks to us all, so apart from 10/10 execution, Luka’s words are just plain beautiful.

Slam master IQ said to the audience early in the evening; “It’s your job to influence the judges… yell at them” – and yell we did. After a while all the whooping started to feel like “Hallelujah!”, and with IQ getting all ministerial up the front, proclaiming things loud and proud, the whole thing got the profound feeling of a revival.

This is the kind of revival I can get behind.

And for a revival of last night’s finalists, come down to the Grace Darling in Collingwood tonight from 7.30pm for the closing event for Overload, where they’ll have a feature spot, wrapping up the massive 10-day event.